Farming smarter, not harder! -
to Menu to Content to Search 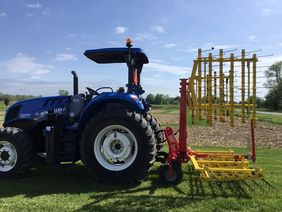 Ronald Wagner, owner of Wagner Farms just did a demo witht the Tined WeederAS 600 on his fields in Rome, New York. He is giving his new cultivating tool a trial run in the evening and is using it to accomplish several things at once:

A common issue on Wagner Farms is that fields that were previously used for sunflowers and were then converted into seeding grain like corn are having a hard time with emergence due to the hard packed, crusted clay soil, a result from havy rain falls. After 20+ years Ronald decided to take preventive measures to stop his crop loss. The results of using the Tined Weeder on his fields are visible here, the day after the demo and after a rain shower:

Doing a second pass 2-3 days alter in the opposite direction. Depending on the soil type, cross cultivation will work but it is harder on the equipment. He believes the Tines Weeder will be a great tool for incorporation of herbicide under certain conditions which rain fall totals are not enough to mix in. Additionally, a pass before spray makes for a better surface.

"There are many applications for this tool: Kill first weeds, break crusted soils and insure crops remain productive. The simple cost of the tool will be offset greatly simply by using it for these applications."

Do you have any questions to our Organic Weeding implements?
Feel free to contact us today!

Did we catch your attention and you are interested in learning more?
Contact your nearest distributor today to get a custom quote and schedule your own demo!